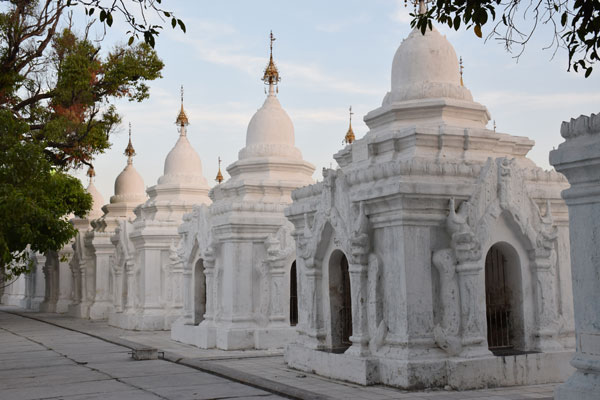 Kuthodaw pagoda is one of the interesting places in Mandalay which is known as the world biggest book. Its official name is Mahalawkamarazein pagoda situated at the base of Mandalay Hill. Myanmar language- Kutho means merit and daw means Royal: Kuthodaw pagoda means royal merit pagoda.

At the time of construction of Mandalay Palace, King Mindon built Kuthodaw Pagoda which is model on Shwezigon pagoda in Bagan. There is main stupa with 4 shrines at each cardinal point in the wide space of pagoda compound.

In the year 1872, King Mindon invited 2400 Buddhist monks from other Buddhist Countries and celebrated Fifth Synod. And decided to make permanence book with Buddhist sculpture. Chose white marble slab to write teaching of Gautama Buddha called Tripitaka. Tripataka is Buddha canon written in Pali language means Three Baskets. Buddha teaching was put in three concepts: The Sutta Pitaka, Vinia Pitaka: Discipline for Buddhist Monks and Abbhidama Pitaka. Tripitaka was written on 729 marble slabs and placed in Kuthodaw Pagoda compound, each slabs with two faces was housed inside the temple. Each slab is 1.5m wide and 12cm thick. The marble book was started to write in the year 1860 and finished after 8 years.

The whole book was written in old Pali language – Myanmar script on hard marble slabs. It is very important not only for Buddhism but also for Myanmar Literature. Originally it was inscribed by golden ink but at the present time refilled by black ink.
Walking into the neatly Kuthodaw pagoda among white temples are so impressive. There are several pre wedding photographers, local visitors with colorful Myanmar umbrellas in the pagoda compound as series of white temples and huge trees are beautiful natural background.