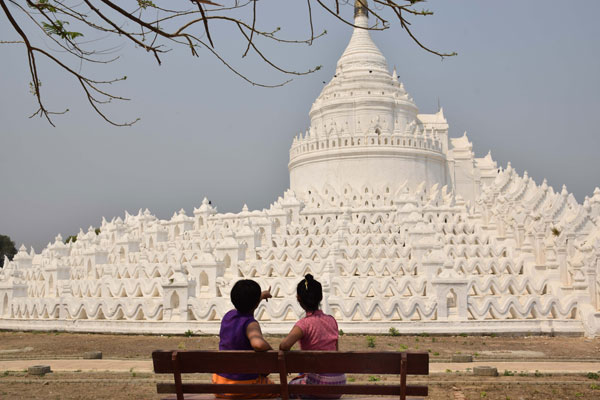 One of the recommendable places visiting around Mandalay is Mingun which is a small town lies on the bank of Ayeyarwaddy river. Mingun can reach by road or by river may take an hour from Mandalay.

It is charming village. Villager’s main income is from tourism. It has local tourists as well as travelers from other countries all year around. Massive unfinished pagoda, gigantic bell and Myatheindan temples are 3 main interests of Mingun.

When the pagoda had reached 50 meters high, one third of the intended height, the construction was stopped. There were probably several reasons why the project stopped. One of the reasons due to an astrologer prophecy, once the temple was finished; the king would lose power and die. King Bodawpaya decided to stop construction as he was not well; he was tried for spending lot of time and money. Many labor worked for the construction for many years. Main labor is slaves from War. It would have another difficulty to get enough labor as many of slaves escaped. There may also have technical difficulties with the construction due to massive size of the temple.

The guards of massive temple, 29 meters high lion statues faced to the river were also hit by earthquake and remain only posterior part of the body.
For huge temple, there is gigantic bell famous as world biggest bell among the ringing bells weighing 90 tons. It was also hit by first earthquake and now moved to some meters from huge temple housed in small pavilion which was well decorated 19th wood curving. Myanmar bells do not have clapper. The bell is rung by striking its exterior with a wood log.

One of three attractions in Mingun is Myatheindan temple. Shwedagon pagoda in Yangon is amazing. Temples in Bagan are incredible too. White Myatheindan temple is very special. The temple was built in early 19th century by Bodawphaya. Unlike other pagodas, it has 7 terraces represent 7 mountain ranges and 7 rivers surrounding Mt.Meru.
There are four stairs to go up, southern and western stair mainly used.

It is very nice for photo shoot walking around the pagoda on every terrace. When you get to the second wide terrace, enjoy the view around the temple. Few steps more will bring you to the top of Myatheindan temple. Local tourists come there for offering to Buddha image.