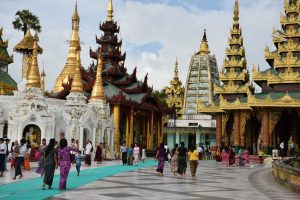 Rangoon is former name of Yangon. The originally name of Yangon is Dagon. In 1755, King Alaungpaya, the founder of third Myanmar Empire , conquered over Dagon and changed the name to Yangon. Yangon was the capital of Myanmar until 2006. It is the largest city in Myanmar. Nowadays, Yangon is the important commercial capital of Myanmar. Yangon city set up on 598 sq km,  6 millions of people are living. The interesting places in Yangon are Golden Shwedagon Pagoda; the most venerable stupa in Myanmar, Botataung pagoda, Sule pagoda; heart of Yangon city, Chaukhtatgyi pagoda; 68 m long reclining Buddha and Bogyoke market.

It is 80km (one hour drive) from Yangon. Bago ( Pegu ) is one of the richest archaeological sites in Myanmar.  You can do day return excursion from Yangon. Bago was the capital of Mon Kingdom in 14th century. On the way to Bago you can make short visit to Hle Ku local market to observe the daily life of Myanmar people. And by making short visit to Shwenyaung Bin; Golden Bayan tree you may aware strong influence of Nat worship in Myanmar.

Interesting places in Bago are Shwemawdaw Pagoda ; the highest stupa in Myanmar, Shwe Tha Laung Reclining Buddha ; 52 meters long 16km high reclining Buddha. It was originally built in 994 AD to commemorate the change of religion from Animism to Buddhism.  The four sitting Buddha called Kyaik Pun pagoda and Kyatkhawaing monastery with over 1000 monks in highlight of Bago. It is the best place to realize the way of life of Buddhist monks. 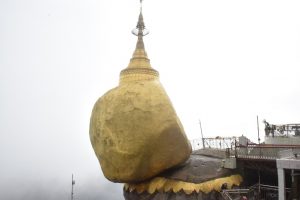 Kyaikhtiyoe pagoda is known as Golden Rock which is situated 160 km, 4 hours driving from Yangon, 1120 m above sea level. The holy Rock is situated on the cliff of the mountain. One can reach by car to the first base camp and then take the truck about 45 m with local tourist and reach the second base camp. Then walk for 45 m on the mountain and reach to the top where there is holy Golden Rock.

Pyay was formerly known as Prone. Pyay is 161 km from Yangon, on the bank of Ayeyarwady River on a lovely location.  The most interesting place around Pyay is the ancient Pyu capital,  Srikestra  4th century to 9th century before Bagan. Pyay is small town you can enjoy tranquility from Shwesandaw pagoda. The ancient capital of Srikestra lies 8km from Pyay. The ruins of Srikestra such as Baw Baw Gyi, Be’ Be’ Gyi pagoda are interesting places in Pyay.

300 km from Yangon, 70 km from Thaton at the mouth of Thanlwin river there is lovely city Mawlamyine, is also known as Moulmein, is the capital of Mon State. It served as the capital of British Burma from 1827 to 1852.It is the third largest city in Myanmar. Kyaikthalan pagoda which gives you lovely views over the city and harbor. Famous Winsein Tawya ,the largest and the second largest reclining Buddha in Mudone, Dead Railway, Setse beach , Kyaikkhami Yele pagoda are interesting places near Mawlamyine.

270 km from Yangon there is lovely town called Hpa-an, the capital of Kayin State. One can go there form Mawlamyine and enjoy natural beauty on the way. Uhna auk monastery is the historic place for Kayin people one can see fine wood carving of 19th century. Then one can visit Khayone cave, Kawgoon cave, Saddan cave, Bayinnyi cave around Pha-en.

It is situated 60km from Mawlamyine. There is well maintained war cemetery for thousands of Allied soldiers who died during Second World War. There is also famous death railway made by Allied prisoners of war for Japanese. That death railway joined two countries; Thailand and Myanmar.