The glorious capital of First Myanmar Empire. It is the land of thousands of ancient pagodas spread in an area of 40 sqkm make bagan. It is one of the richest archaeological sites in South-east Asia. Bagan was hit by earthquake in 1975.

The prototype of Myanmar stupa with graceful bell shaped stupa. It was built in 11th century and is the land mark of Bagan.

It was built in 11th century by king Kyansitha. Ananda temple is the masterpiece of Bagan. It has four entrances and the foundation has perfect Greece Cross. Inside the temple there are 10m high 4 huge standing Buddha.

It is one of the temples which was built late period of Bagan. It is famous for the perfection of stucoo work and two layers of the mural painting ;12th century and 18th century. The stucoo work at Sulamani temple is the best in Bagan.

It is a lovely town that is situated on the bank of Ayeyarwady river, one can visit there by day return from Bagan. Between 11th and 13th century when Bagan was the capital, Salay had been an important city. You can also see two-storey colonial building. Yokeson wooden monastery is the most interesting place of Salay and now it represent as archaeological museum of this small town. Inside the hall there is a big collection of antique religious objects from 11th to 13th century. The monastery was built in 1882. 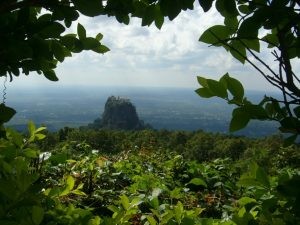 50km, one hour drive from Bagan you can reach Mt.Popa and enjoy the landscape of dry zone, typical villages and sugar production from palm tree. It is possible a day trip from Bagan.  Mt.Popa is an extinct volcano, is the highest landmark of central Myanmar. It is also famous place for Nat worship. Around Mt.Popa is fertile land so there are many fruit plantation and vegetation. Mt.popa is “Oasis of the Dessert “in central Myanmar. The main mountain is 1518m above sea level. From the top of Taungkalat one can enjoy a panoramic view.